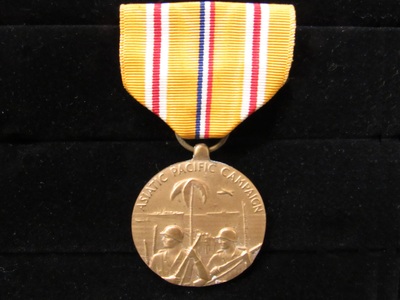 This is an Asiatic–Pacific Campaign Medal which was given to those who served in the U.S. Armed Forces for at least 30 days in the Asiatic-Pacific Theater during World War II (1941 - 1946). The award was first issued as a ribbon in 1942 but in 1947 the medal version seen here was issued. The first of these was issued to General Douglas MacArthur.

This work is licensed under a Creative Commons Attribution-Noncommercial 4.0 License