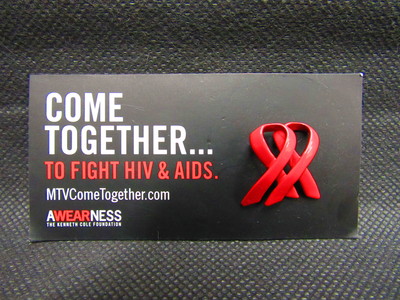 This is an AIDS awareness double red ribbon pin which was sold for $5 Kenneth Cole stores across the United States between November 4 and December 31 of 2011 as part of MTV's Come Together Campaign to fight HIV/ AIDS. The double red ribbon symbolized the coming together of individuals and the re-doubling of efforts in the fight against HIV and AIDS. The MTV campaign had a number of famous celebrities pledge their support to the cause such as Sarah Jessica Parker, Kesha, Estelle, Skylar Gray, Rose McGowan, Cyndi Lauper and Cheyenne Jackson. According to the campaign's webpage (mtvcometogehter.com), all net profits were donated to AIDS awareness and research, and the funds were split between amfAR and the MTV Staying Alive Foundation.

All measurements were taken in centimeters. Measurements are listed as “length by width by height” or “height by diameter” unless otherwise noted.

This work is licensed under a Creative Commons Attribution-Noncommercial 4.0 License